If you look up incandescence under a dictionary, the term relates to the release of electromagnetic radiation from a source with heat. And with that, everything releases EM energy.

Once can visually see light bulbs  with your eyes. You can observe animals with the help of thermal cameras. Even the cold depths of space itself at -270 C (~3 degrees above absolute zero) can be detected in the form of microwave radiation [https://xkcd.com/54/].

If you want to have an object visibly glow, all you have to do is heat it up above 900 C. That’s not the problem  with the creation of practical bulbs; just run lots of electrons through it to cause thermal vibrations and heat the material. It’s getting the material to handle the heat without melting/burning/warping/etc.

So when inventors, like Thomas Edison, were inventing long-duration filaments, they were actually playing the role of material scientists. That’s where carbon and tungsten came in as key factors in long-lasting light bulbs; they don’t “melt” until brought above 3000 Celsius. They also contain the filament in an inert gas, so it doesn’t oxide really fast (or in simpler terms, catch on fire).

The radiation coming from a heated source isn’t as simple as shifting what colors an object emits. Mass gives off energy all across the spectrum from radio to gamma, forming a skewed “bell-shaped” curve. The hotter an item, the more energy it gives off at all levels (or wavelengths). Furthermore, the center of the bell curve shifts towards shorter wavelengths (infrared -> red -> green -> blue -> ultraviolet -> and beyond). HyperPhysics has a good image that illustrates this property very well: [http://hyperphysics.phy-astr.gsu.edu/hbase/quantum/wien3.html]

This is why one can classify a star’s temperature by its color. Red stars are “cool” and yellow stars are “warmer” as the brightest color shifts from red to yellow. White stars  hit a sweet spot where the temperature is “hot” enough to radiate equal amounts of red, green, and blue light [that is also why they are not green]. And the most intense stars overshoot the peak into the blue/violet/Ultra-violet (invisible) resulting in a bright blue hue.

Note: Even if an object is hot enough, we will never perceive it as being purple, because the cones in human eyes are so much more sensitive to blue light [the same reason why the sky is blue and not purple despite the strong inverse-wavelength dependence of  Rayleigh scattering].

And that is the problem with incandescent light bulbs. Most of the energy they emit isn’t even noticed (unless you are using the Infrared rays up close as a heat source). Thus, they are very inefficient source of lighting. Efficiency is usually determined by (Visible Light Power Out) / (Electrical Power In).  And the current efficiency values of typical light bulbs is ~2 %.

So if you are too cheap to upgrade your tree with LED lights for your Christmas tree this year, just remind yourself that your old-school bulbs create a dazzling holiday display while assisting in the heating of your house this winter. And don’t forget to purchase the “shimmering” lights, where the filaments warp upon heating, cycling through open and closed circuits, and resulting in a slightly random twinkling effect! 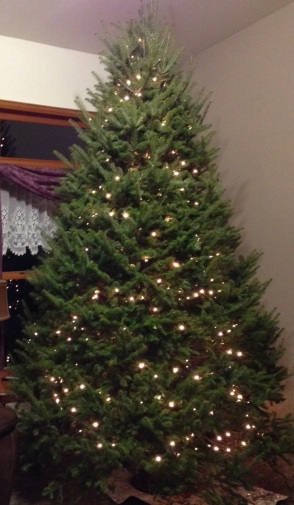